Home is where the art is with “The Apartment Exhibition” 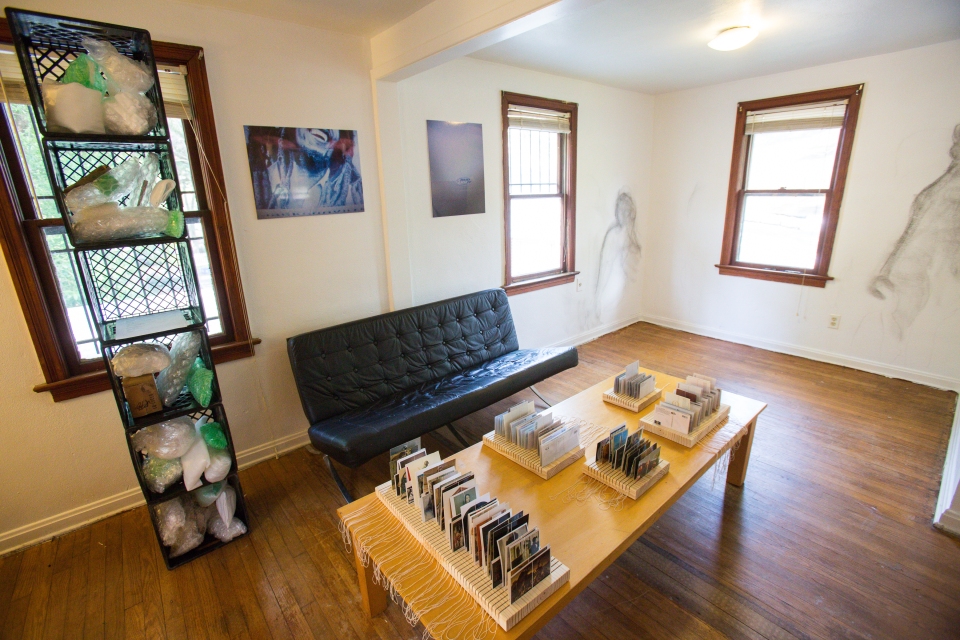 [Installation shot of the living room of “The Apartment Exhibition.” All photos by Laura Evans.]

Five local creative types are putting space to good use. Curated by Staci Bu Shea, “The Apartment Exhibition” features individual and collaborative work by Thony Aiuppy, Sterling Cox, Lily Kuonen and Edison William. Located in Cox’s 500 square foot, mother-in-law apartment behind his Avondale home, “The Apartment Exhibition” features over 30 pieces that touch on concepts of cohabitation, tenancy and ownership as well as deeper, provocative ideas such as nostalgia, impermanence and belonging. END_OF_DOCUMENT_TOKEN_TO_BE_REPLACED

Social media, radical aesthetics and organizational savvy are mixed like alien colors on the conceptual palette of Staci Bu Shea. Since graduating from University of North Florida last year, the 24 year old South Florida native has channeled her youthful exuberance into an inventive and focused presence on the Northeast Florida arts scene. In roughly a year’s time, Bu Shea has arranged and presented seven shows featuring both local and national artists while also landing a notable gig as the personal assistant to artist-educator-environmentalist Jim Draper. And while her contemporaries explore better-known disciplines such as painting, photography or sculpture, Bu Shea finds her calling in the specialized realm of curatorial arts. Yet within that highly academic field’s seemingly mundane demands of organization, overseeing, management and inventorying, Bu Shea uncovers new strategies and solves compositional problems, armed with highly 21st century ideas like pluralism, relational art and social formations. And while most curators are almost bound to be associated with one organization such as a museum or gallery, Bu Shea seems most excited in taking the curatorial arts figuratively and literally to the streets; in her piece “Subsidence on Forbes,” Bu Shea turned a Riverside sinkhole into a temporary art exhibit and an organic commentary on themes like impermanence and government hypocrisy. Bu Shea is most inspired by the blur that occurs when philosophy merges with art theory, yet she is also as enamored of the traditionally tactile pleasures of producing catalogs or even custom-made, letter pressed business cards. END_OF_DOCUMENT_TOKEN_TO_BE_REPLACED